Behold… The Beard and The Barbecue is in da’ house! He’s one of our favourite competition Q’rs on the Australian circuit today, with his awesome skill, wicked humour and his own very own sauce line thank you very much! We asked Tony to give us his tips for barbecuing on Australia Day and he came up with this cracker pulled lamb! Take note people and enjoy. 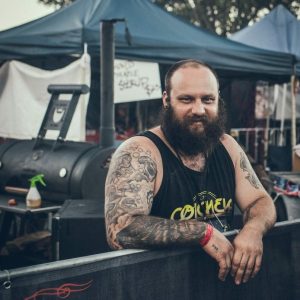 Few things are as amazing as pulled lamb. It’s currently my second favourite thing to barbecue and eat. So much so that I found a way to do it that did not involve 8 hours of cooking. It’s important for hot and fast cooking that you have a nice fat cut of meat. So I always use lamb shoulder.

Get your Firebrand Hex Logs  in a chimney  and light! I used one full chimney.

Usually in low and slow most cooks are 5 to 6 hours minimum. Ain’t nobody got time for that during the week! So hot and fast it is! This is done at temps of around 175 degrees Celsius (350F) It’s important that when cooking hot and fast that you introduce some liquid at some point to prevent the meat drying out. Especially when cooking direct as I did.

I used a Pro Q Excel Elite with the water pan out and was hanging the meat from the hood for a few hours, a feature of this particular cooker. Leaving about a meter between the Firebrand hex logs and the hanging meat. However if using another cooker just make sure you’re cooking indirectly. (A whole post on its own, I suggest you google indirect cooking with charcoal right now)

Dump your lit Firebrand into whatever cooker you intend to use. Just make sure it’s HOT.

Put your lamb in and cook at this temperature for 2 hours. By this point you will notice it is significantly smaller.

As mentioned it’s important to introduce moisture when cooking at these temps. And while you’re doing so why not introduce some FLAVOUR

I removed my shoulder from the hook at this point and inserted a grate into the smoker. But if you’re cooking on a grate the whole time you don’t need to do that now do you.
Spread out a double layer of extra strong foil on the grate, place the meat in the middle and fold up the edges.

After a further hour and a half in the cooker at the same temperature pull the wrapped lamb shoulder off the cooker and let rest on the counter in the foil for 30 minutes or so.

With some heat proof, food safe gloves start tearing this thing apart making sure to keep the juices in there. It’s a good indication its done right when the shoulder bones are coming out clean with no meat on them.

Toss all the meat through the juices and GET EATING!
[/vc_column_text][vc_mad_gallery columns=”3″ images=”5102,5106″][vc_column_text]Thanks Tony, you’re a legend mate! To see more of ‘The Bearded One’ follow him on: