A delicious fusion of middle eastern-inspired stuffed capsicums using onions, mushrooms, barbecued scotch fillet steaks, topped with cheese. The dish is slowly woodsmoked over charcoal until tender and golden. The question is… can you stop at one!

We’ve used the Napoleon Rodeo 57″ Kettle Charcoal BBQ for this cook which offers us the versatility of being able to cook indirectly to smoke the stuffed capsicums as well as grill directly over high heat to sear our steaks. Any kettle BBQ that can retain temp will be fine for this cook.

We’ve opted to use a mix of our Firebrand Premium Briquettes and Professional Hardwood Lump The combination of fuel allows us to have a long lasting heat for the smoking portion of the dish when set up indirectly. Plus, when spread out under our steaks, and in particular placing the briquettes directly underneath, we had the firepower needed to get a high heat for some serious char marks on our steaks!

In addition, we’ve thrown in few chips of ironbark to provide some awesome smoke when smoking the stuffed capsicums.

The hinged grate of the Napoleon Kettle was very handy to be able to just drop in the iron bark chips easily over the briquettes when it was the right time without having to lift everything off and on again.

We’ve used our charcoal starter to get the fuel going, with a layer of lump at the bottom which catches quicker and then packed to the brim with our hex shaped briquettes in an upright manner to allow the fire to flow through the middle hole of the briquette. Three firelighters underneath was all that was needed to get the fire started and we let the chimney do its thing. 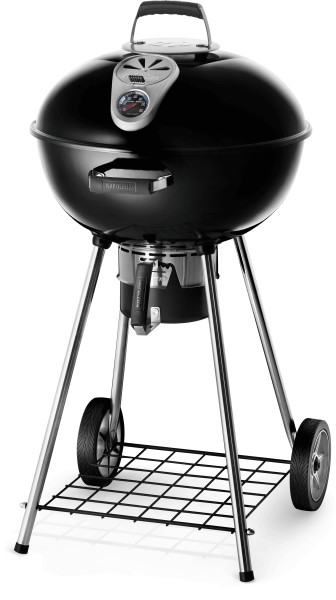 6 large red capsicums, tops cut off and the insides cleaned out 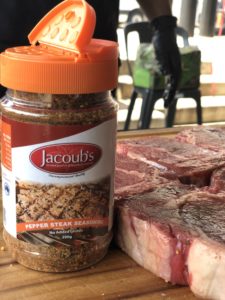 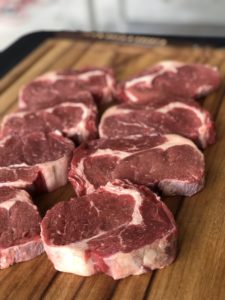 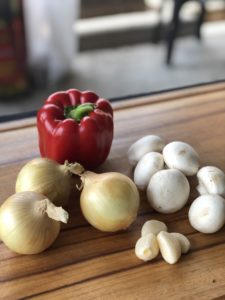 Oil your steaks first to help the rub stick to them. then liberally sprinkle the Jacoub’s pepper steak seasoning over your steaks on both sides.

Prepare your kettle BBQ for a direct grill by spreading your lit charcoal evenly across the kettle.

We’ve used Grill Grates over the regular Napoleon Kettle BBQ grill to achieve the classic charred crisscross grill marks. If you don’t have them simply grill on the provided grate and turn in opposite directions to achieve a diamond pattern.

Grill steaks on high heat for 4 minutes each side achieving nice charred grill marks. You want them undercooked at this stage as they will finish cooking when they go back into the kettle for smoking later. Set grilled steaks aside to rest. Cut the tops off and remove insides of capsicums and place them in a foil tray ready to be stuffed.

For the stuffing. In a fry pan heat the butter then directly over the charcoal, fry up the onions and mushrooms. Meanwhile slice up your steaks into thin pieces. Season your onion and mushroom mixture with more of the Jacoub’s Pepper Steak seasoning + Salt & Pepper. Take off the heat and allow to cool slightly.

Once cooled, mix in your sliced steak chunks and you’re now ready to stuff.

Fill each capsicum with your onion, mushroom, steak mixture packing it in and to the top.

Place a heaped handful of cheese over each one and add a final sprinkle of the Jacoub’s Pepper Steak Seasoning over the top of the cheese on each one.

At your BBQ, rearrange the charcoal for an indirect cook by placing all the lit charcoal to one side or if using the Napoleon baskets, fill each basket with lit charcoal and place baskets on each side leaving the middle of the grill area free of any direct heat.

Place your tray of prepared capsicums over the area of your grill that does not have direct heat underneath.

Place a couple of chips of iron bark wood over your lit charcoal. We used the hinged grates of the Napoleon for ease of use. 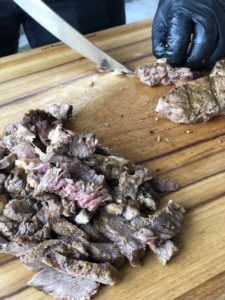 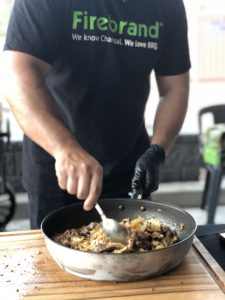 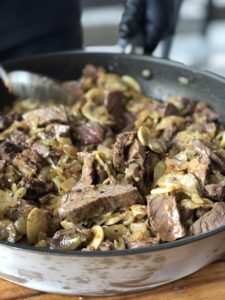 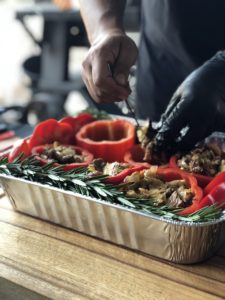 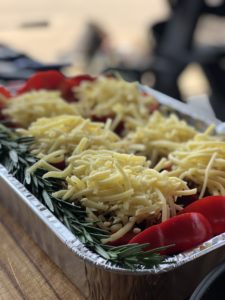 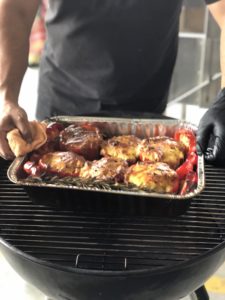 Tap on each link to be taken to the products we’ve used for this cook.